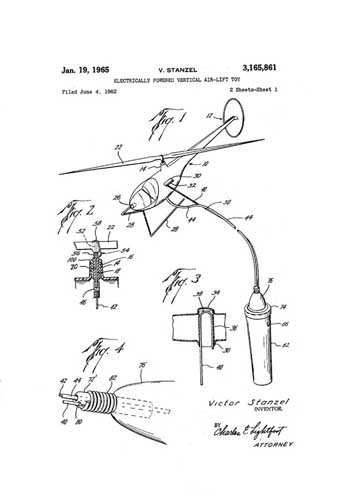 "A further object of the invention is to provide a vertical air-lift toy which is of light weight, efficient and easily controlled in operation, and of strong and rugged construction, having long wearing qualities."

"The invention has for an important object the provision of a vertical air-lift toy, of the helicopter type, which is powered by batteries of the kind commonly used in flashlights and which is capable of taking off and landing vertically and hovering or travelling forward and back
ward in flight."

Victor Stanzel, together with his brother Joe, set up the Stanzel model manufacturing company in the early 1930s and were pioneers in the field of control-line flying. Read more about their significant contribution to aeromodelling on the AMA Model Aviation Hall of Fame webpage www.modelaircraft.org/museum
The Stanzel Model Aircraft Museum also has an excellent website, definitely worth a look www.stanzelmuseum.org 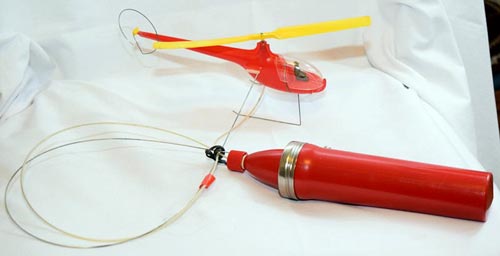 Our contributor sent us this patent "especially for Doug Smith, who seems to have had many of these vintage patented toys in his childhood." Did you have this one, Doug? :)
Mary - 28/06/2016
Yes, this is exactly the one I had, but it must have been produced and sold long before the patent was applied for in 1962, I think I had mine sometime in the fifties. I see some other patents on your site showing foldout paper airplanes, usually distributed free as advertising giveaways. My first one was cut out of a cereal box, all in one piece, then the wings and tail unfolded to make a finished model. A piece of modeling clay held the fuselage together in front and also provided nose weight. Whenever anyone in the family would open a new shirt, I immediately scarfed up the thin cardboard for more models. Surprising how much a cardboard cutout will teach you about adjustments and balance, even airfoils bent to different shapes.
DougSmith - 18/07/2016
I was able to find a pic of the one I had, sometimes available on Ebay [image003 above]. While mine was fun, it was pretty much a one trick pony. A push button on the flashlight handle applied power to the rotors and you twisted the handle for forward and back, that's all it would do. I'm sure it must have been a Christmas present back in the day, no way I could have bought one myself. We were so poor we had silent TV. At Christmas time we decorated a stump. My main source of income was picking up discarded soda bottles on the side of the road and turning them in for the 2 cent deposit. A good haul would fill up my bicycle basket.
DougSmith - 19/07/2016
email a comment