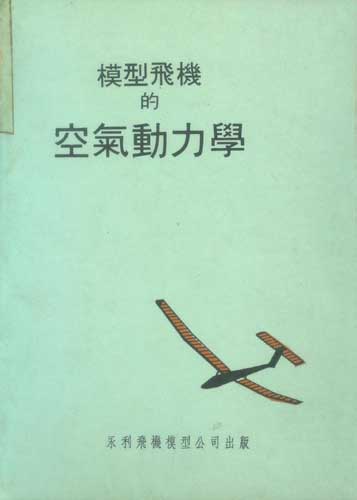 "Aeromodelling activities in Hong Kong, which started before WWII, have been going on for at least three or four decades. Until now, no book on aeromodelling theory written in Chinese has ever been published."

The first book about aeromodelling theory to be written in Chinese.

Published in 1973 in Hong Kong by Mr. Bing-Lin Ng, a pioneer of RC modelling activities in the former colony. Mr. Ng is also the owner of the Winning (Radio Control) Model Company and co-founder of the only modelling club in Hong Kong with a permanent flying site. The author, Mr Chu, was "a renowned theorist in low speed aerodynamics."

Jimmy So, who shared this book with RCLibrary, says: "There was no price printed on the book so I think it was published for modellers' benefit rather than for profit. The number of copies printed was probably quite small. My copy may be one of the very few left. I hate to see his effort vanish into obscurity over time. Mr. Ng is now in his '80s, and rarely flies these days."

Special thanks to Jimmy So for the English translations.

Thank you! Very interesting book. And so all the detail and so clearly written! And what about radio control itself (site is named RCLibrary)?
Nikolay - 29/04/2016
Glad you liked this book, Nikolay. Re: remote control, it says in the introduction: "In this book Mr. Chu explains in simple language various scientific aspects of model aeroplanes in great detail. As this book is focused primarily on free flight, control line and rubber powered models, readers may feel that it has not much to do with the currently more popular radio controlled models. In reality, this book is still very relevant to radio control, especially for the free flight theory." Maybe that's your answer?!
Mary - 29/04/2016
email a comment